Today we had some fun trying to get into a new park. After a long hot day on the road, we were assigned a space which was a very tight fit for the rig; we were getting lined up between two trees... with only inches to spare from the trees on each side of the motorhome... when the RV died. It just up and died while we were completely blocking the road and snuggled up in between these two trees. And it wouldn't start again. We looked at each other and said, No Way. This is not happening! 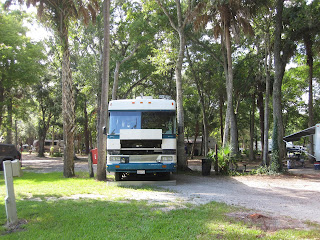 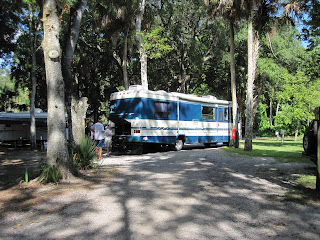 Well, Chris put on his work clothes and started puttering with the engine to try to get it started again. The park office was really nice about it and routed traffic around us for a couple hours while Chris worked on the RV. Finally a neighbor said he'd hook up his truck and tow us out of the middle of the road. We got the chains hooked up, he had his truck in gear, and Chris tried the engine one more time... VAaRooooM! What was wrong? I asked. Duh, Chris says, it was still in gear! We'd both completely missed the fact that when it died we'd forgotten to put it in PARK! Of course it wouldn't start in gear! Wow, we feel stupid. At least we were finally able to finish parking and get the AC turned on! What an adventure! After all that hot work we decided to "cook" Subways and cold beers for dinner and then swim in the pool for a bit.
Here's the Conquering Hero! 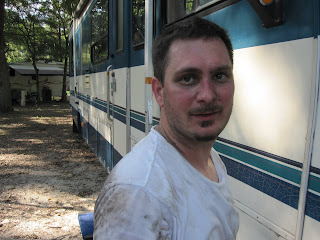