We've been visiting my awesome aunt and uncle in Jupiter, FL. Today they took us out for a day on their boat playing around Jupiter and Palm Beach. We didn't bring dive gear but we did go snorkeling off their boat. In our seven years of scuba diving together we have seen some beautiful sea life and today's snorkeling ranked up there with the best! Our first snorkeling site was a rock jetty which was covered in barnacles and a variety of corals and urchins. We saw some of the usual suspects - parrot fish, sargent majors, and other common reef fish. We found a large trumpet fish and then a huge puffer. We also saw a large group of cuttlefish! I'd never seen them before. These squid-like critters are very cool because they can change color in a way that would put a chameleon to shame. We found about 15 on today's dive which is pretty amazing. One of these strange guys kept waving his tentacles over his eyes. We don't have an underwater camera right now but here's a photo of a cuttlefish from Google: 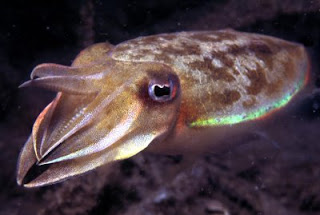 As we were coming back towards the boat I turned and suddenly only about 10 feet away from me was a huge sea creature the size of a couch! And it was barreling down on me! I actually screamed underwater out of surprise. Then I realized it was a manatee who is one of the most gentle creatures of the sea. This particular manatee was in quite a hurry to get away from another snorkeler who was chasing it. People frequently get so excited when they see a creature in the wild like this that they want to get closer, maybe touch it, and don't realize that they are actually chasing him and he wants only to go on his way unmolested. I let him pass but it was so cool because we have seen manatees and even snorkeled with them in Florida's springs but we had not seen one in the ocean before! I just love manatees and I always tell people that they are just like huge underwater dogs! They love to be scratched (when they're in the mood) and they can be very playful and when happy they will hug themselves with their stubby flippers and roll upside down. Picture a puppy rolling on his back with his four paws up in the air. Now image it underwater. Imagine it looks like a cross between a hippo and an elephant and is the size of a full-size couch. That's a manatee! 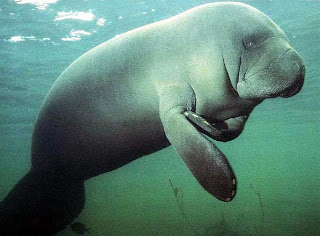 On the next dive we went to a patch reef in the shallow waters in front of the ritzy Breakers Hotel. We were swimming along, watching the various reef denizens and schooling fish. The water was fairly clear and warm. Suddenly Chris points excitedly to my right side. There's a manta ray there! 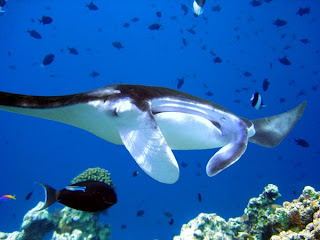 This is the largest species of ray but this "baby" was only about six feet wide! Neither Chris or I had ever seen a manta ray so what an awesome treat. And this guy decided to hang out! The manta played on the reef swooping around us for about half an hour; we got to free dive next to it, swim under it and right above it. He would swim past us to just out of sight and then he'd turn and come back to us. Rays look just like they are flying when they swim. We were flying high after such a great day out on the boat! Thanks so much for taking us out, Jacqui and Jim! 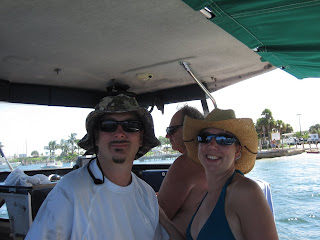