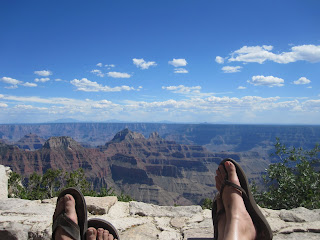 The Grand Canyon was everything I had dreamed it would be!  It was Stunning, AWE-inspiring, and Magnificent!  This was a trip I've been looking forward to for many years.  We actually tried to visit the South Rim in December 2009 but had to turn around due to bad weather.  Finally, we made it! 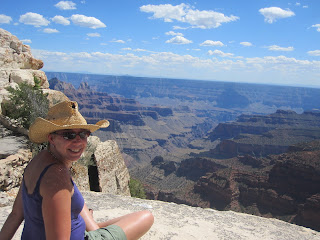 We visited the North Rim and spent a night tenting in their campground.  The North Rim is the lesser visited rim because it is very far from any major cities or interstates.  There is only one highway that goes into the park.  We were glad we had left the motorhome and decided to tent it when we found that the highway into the park has miles and miles of climbing hills.  The motorhome could have made it of course but we would have spent an awful lot on gas!  The drive takes you through an area known as the Kaibab plain where the wildflowers were in full bloom.  The one city, Jacob Lake, consisted of a campground and a gas station.  I asked the employees at the canyon where they go for groceries and learned that they drive a hundred miles to Kanab, Utah!  It gives a new meaning to the word "remote". 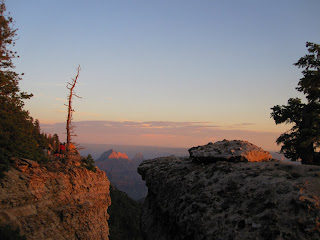 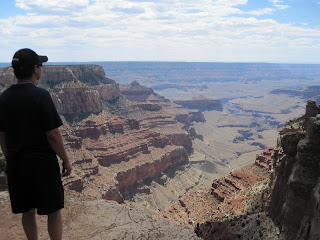 Like most campers we started out at the North Rim Lodge and Visitor Center.  There is a deli, a fancy restaurant, and a gift shop.  It even has its own Post Office!  We walked to Bright Angel Point and Chris was able to do some work while perched on the rim - luckily he was able to get a cell signal by shooting across the canyon to the tower on the south side!  Generally we actually had better cell service at the Grand Canyon than we've had while working at Coral Pink.   We hiked to Bright Angel Point then went back to the campground for burgers.  We brought beers and chairs to the rim to catch the sunset.  It got pretty chilly at night at this elevation so we were glad for the warm sleeping bags we got ourselves for Christmas! 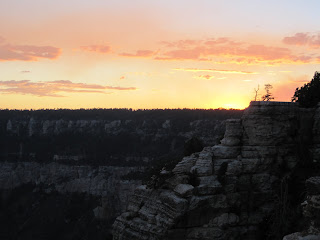 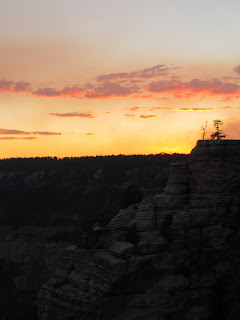 The next day Mom and Dad had to head home to Texas but Chris and I stayed all day.  We drove out to Cape Royal - a 25 mile drive that was well worth it!  This area of the Grand Canyon was much less crowded and actually even more beautiful!!! 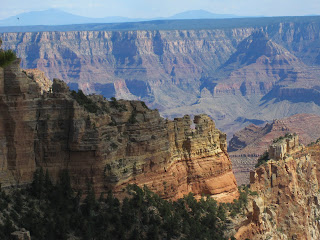 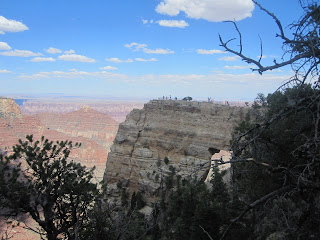 From this higher viewpoint you can see all the way across the red rocky canyon to the South Rim where miles of green expanse fade to purple mountains in the remote distance.  Here the colors of the canyon were intense; lines of green and red and gray and pink marched across the stark landscape.  Trees the size of pinheads stud the canyon walls and floor and the Colorado River appears as a shining ribbon in the distance.  I apologize that photos cannot capture the vibrancy of the scene. 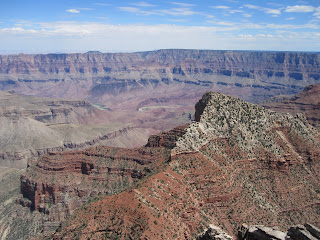 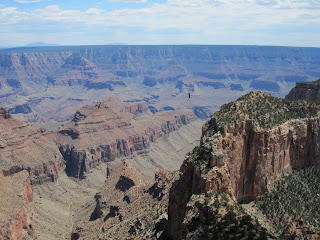 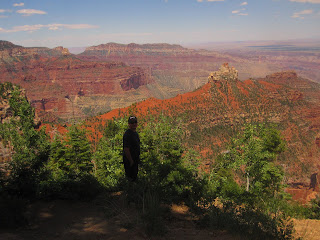