We found out that there are dinosaur tracks in the rock lining a wash on public land very close to where we are staying in Utah.  This afternoon we drove out to the site which is about two miles off the paved road.  The information we had said that due to loose sand 4x4 vehicles were required to make the trip.  We drove down to the site with little difficulty and found several of the tracks, some that were pretty obvious.

On the way back to the paved road we realized that most of the trail we had followed in had been downhill.  Going back uphill was a little trickier than we expected.  Eventually we hit an extended patch of deep sand and the Jeep settled in.  We got it to budge a bit by digging sand out and putting what small bits of wood we could find under the tires.  Eventually the Jeep was in over its axles in sand and we had to give up.  Our second vehicle in two days stuck in the sand.

In the desert, at least one mile from the nearest other people we've seen (some ATV'ers we passed on the way in) in 100 degree heat.  Our survival equipment included:

We ended up having to walk a mile in sometimes shin-deep blistering sand wearing flip-flops.  Luckily one of the three ATV'ers we had seen while going in on the trail was staying for a couple of days, had extensive 4x4 experience and had been driving the area for a few decades.  He drove us down on his Razr (a large ATV with a cage, big engine, etc.) and we started shoveling sand.  We finally got the Jeep backed out of the hole with help from the Razr.  He deflated our tires a bit and I filled in the 1 1/2 foot deep holes in the trail.  He told us to follow him on his ATV and that he'd drive the Jeep back out.  He backed the Jeep down the hill and then took off back up the hill.  By the time I got his ATV turned around he was gone.  We caught back up to him at his camp, offered to buy him some beer for his trouble, chatted for a while and then headed back to the motorhome.  We were lucky, the nearest people from that location would have been a five or so mile walk in 100 degree temps.

We learned quite a few lessons from the adventure.  We did get a picture of a dinosaur track from it all though. 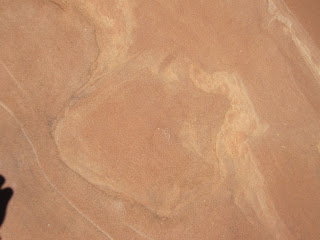