A Fun Weekend in South Utah

My weekend is on Wednesdays and Thursdays while I'm at this park.  It was also payday and we desperately needed to go shopping.  There is some shopping in Kanab which is a half hour drive; but the shopping in Kanab is limited and pricey.  We decided to make the longer drive to Walmart instead.  The Rangers told us about a shortcut which takes about 45 minutes off the trip!  It starts with a 4 mile stretch of dirt road.  It's very beautiful but the words "remote" and "isolated" just don't quite cover it.  With the shortcut it only took us about 50 minutes (one way) to get to the closest "big" city. 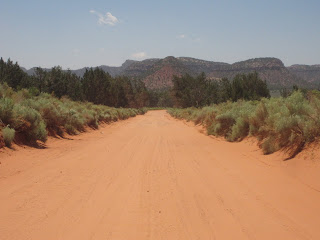 Next we decided to stop in at Kolob Canyon which is the north entrance to Zion National Park.  We made a quick visit and ate a picnic there.  The canyons and cliffs hold much more vegetation than the southern half of this park.  This part of Zion is less visited and apparently much more oriented toward backpackers and canyoneers. 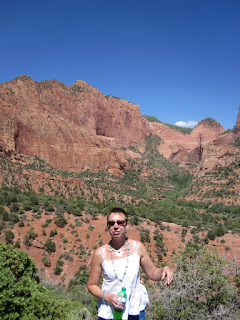 On Thursday we made a drive over to the south side of Grand Staircase-Escalante National Park.  This must be one of the biggest and least developed of the US National Parks.  It comprises almost 2 million acres of land!  To put this into perspective it is 50 miles from the south end of the park to the north end, and the only way to drive across is a dirt road. 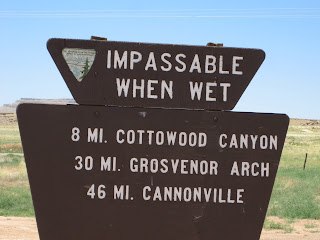 We decided to pass on that adventure and instead just did a short hike to an area known as Toadstools for its interesting rock formations (look at the top of the hill in photo below).  We didn't hike too far, it was pretty hot and it scares me to hike on these mostly unmarked trails; if you got lost out here you could wander forever without finding any other people!  The cell phone has become an expensive alarm clock; there's no cellular service out here to speak of.  We've decided to start bringing a GPS unit while hiking in the desert. 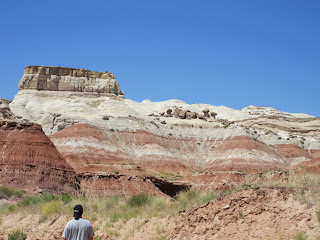