Not much tsunami here 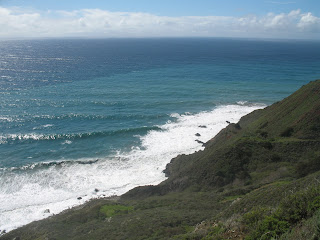 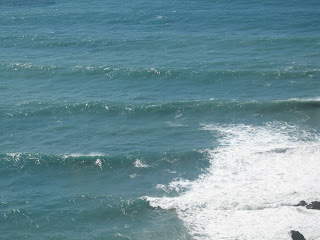 The tsunami wave created by the Chile earthquake did touch the California coast here in Big Sur but it didn't look like much. Instead of a wall of water, we had unusual waves. The waves were 15-20 ft which is about average for a storm around here. But these were stronger than usual; they pushed farther up the shore than your typical storm waves. And they were on a very short period. In the photos you can see that the waves are all lined up and very close together.
Posted by Chris at 9:18 PM No comments:

A day at work

A lot of people have asked me what I do at the state park. I will outline today as an example of a pretty good day at work. This morning I woke up around 8:30. I was picked up by a ranger at 9:30 for a ride to "whale watch." We drive to a good lookout point and put out signs, some props, and information boards then when people drive in we tell them about gray whales, sea otters, and condors. I answer questions, tell them about the sea otter pelts we have and how to spot a whale or a condor. If I see something interesting I point it out to the visitors. We did that from 10 till noon. When we came back into the park I checked with Katie at the front kiosk if she needed lunch relief, then I checked with Dave at the Nature Center to see if he needed lunch relief. They both said they were ok. So I went home for my lunch. During lunch a camper came up and bought some firewood from me. After eating I went back to the kiosk and hung up a new "Pay Here" sign that I created which will help campers to know how to self-register when the kiosk is closed. At the kiosk I also take money and give directions and information. Eventually a camper came up and said she had lost her dog. I got the golf cart and drove her around for a while looking for a little Yorkie. She was so worried, she kept saying that he would never survive a night alone in the woods. Luckily we did find her dog! After reuniting owner and dog I went back to the kiosk to help out some more. When traffic slowed down at the kiosk I decided to leave Katie to handle it (she does get paid, after all.) On my way back to the RV I passed a couple who were looking for directions for a good hiking trail and I told them about a couple trails and sold them a map. Other camp host duties include driving through the campground and checking that all the campers have paid. We collect and count the payment envelopes from the Iron Rangers weekly. We also collect and count quarters from the coin-operated showers. I'm "on-call" 24 hours a day: campers can come up to my house at any time to buy firewood, ask questions, or report problems. The worst emergency I've had so far at this campground was a camper who was inadvertently locked in the bathroom and could not get out.
I think it's much better than spending my days in a cubicle! :) 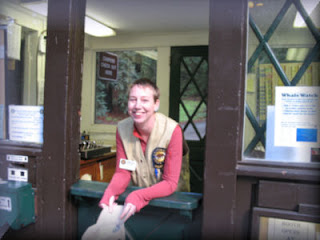 The cabin fever is getting bad around here. Chris has been working non-stop on a new program for work which means lots of sitting around in front of the computer. The weather has included weeks of rain and cold with brief respites of nice weather. Sometimes, though, we completely miss out on a nice day because it's always so shady in the park. We laugh and say we live in eternal twilight here - it always seems dark at our home because of the redwood forest we are parked in. Neither Chris or I expected California to be so cold. It's never really warm enough for short-sleeved shirts here. I think the cabin fever is also partly due to being in one place for so long. We've been in Big Sur for 2 months and now and in one more month we will head north for the summer. We love Big Sur and we will for sure be back but we are also looking forward to traveling and seeing new things!
One of the bumper stickers here says "BIG SUR - I SURVIVED HWY 1!" Chris and I wanted to share with you a little bit of the feel of driving down Hwy 1. There's a great sign I love. It reads "HILLS AND CURVES... NEXT 63 MILES." It is hilly and there are hair pin-curves with mountains going straight up on one side of the road and cliffs going straight down on the other. Most people don't realize there are few safety barriers. No shoulder, 2 lane narrow road, and often there is only a small berm between you and a 500 ft cliff. This picture was taken by stopping in the Southbound lane of Hwy 1 and sticking my arm out of the passenger window and just pointing the camera straight down. 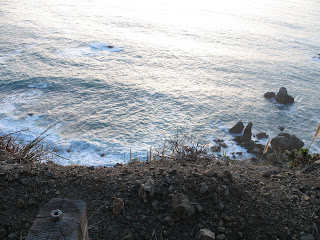 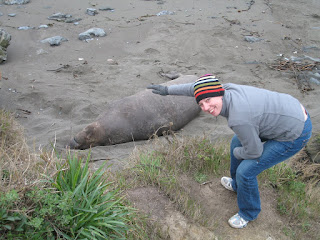 For my 33rd birthday I wanted to explore the southern Big Sur coast. Chris and I took off Wednesday night at 4:30 pm and headed south. There was an amazing coastal fog rolling across the ocean and it followed us as we drove south for about an hour. Just at sunset we reached Naciamento Road which is a steep uphill road into the Los Padres National Forest. No guardrails here! We got some great pictures of the sunset from the mountain. 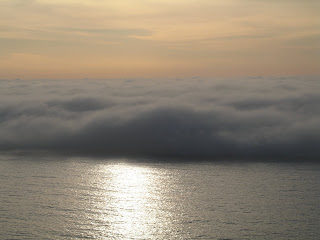 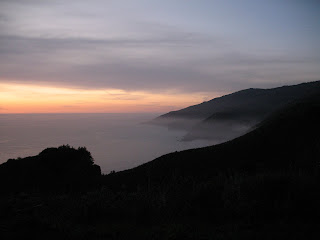 That night we pitched our tent at Kirk Creek campground with an amazing view of the ocean. We spent our evening drinking wine and beer by a lovely fire. When we awoke in the morning we saw a huge pod of dolphins out at sea and we enjoyed watching them while we ate breakfast and broke camp. 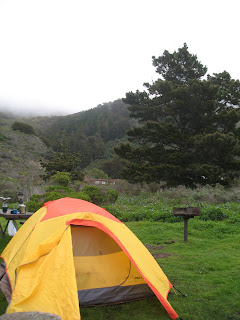 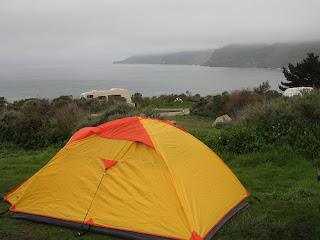 Our first stop of the day was Jade Cove. After an exciting hike to the cove which included a 10 foot section of minor repelling we reached a rocky beach. We spent a couple hours searching for jade which is known to wash up frequently on shore here. We found several small pieces that appear to be jade. Next we stopped briefly at Willow Creek and then at Salmon Falls. We also stopped at a little cafe for coffee and chocolate cake. Then we reached the main event - elephant seals at San Simeon. The elephant seals gather on the beach here by the thousands and spring is the time for baby seals. There is a parking lot on the side of Highway One where you park and can walk down a bluff just above the beach. There is only a rail between you and these giant animals. The male elephant seals are as large as a pickup truck and weigh 2-3 tons! 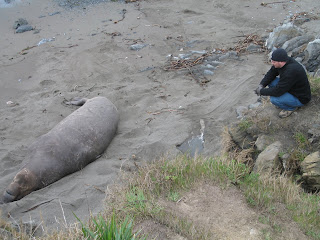 They were very vocal; the babies would shove each other around and cry. The males were very territorial with other males and they would bark a loud warning when they felt threatened by another male. There were hundreds of baby seals of varying sizes. We left for a bit and ate lunch on Hearst Beach and walked on the pier where we found an otter playing in the waves. 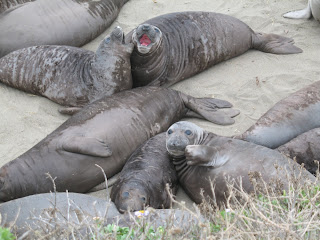 Then we went back to the elephant seals and found a little-used trail that followed the coast for a mile or two and we were able to check out the seals without any rail at all between us and them. We could get down on the beach with them if we wanted to and Chris got very very close to a huge male for some photos! We finished the day with a picnic on Sand Dollar Beach. What an amazing birthday!!! 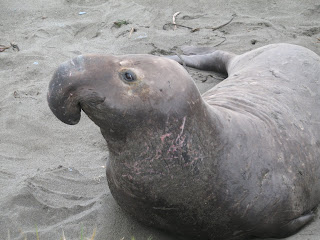 The holiday weekend at the park has been very busy. Melissa has been running from place to place trying to keep up with the visitors. Finally Sunday night we got to take a break and go to Pfeiffer Beach to see the sunset on Valentine's Day. The tide was down and we got to climb into one of the rock "windows" which are carved by the waves. Then we found a nice spot away from the crowds and watched the sun sink below the horizon. Now we're going to curl up with a movie and a couple of drinks and enjoy a quiet evening in Big Sur. We're still loving our nomadic life. 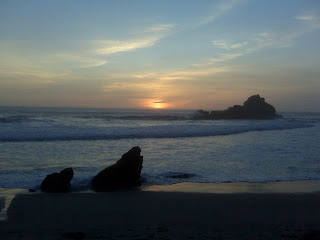 Hiking to the Buzzard's Roost 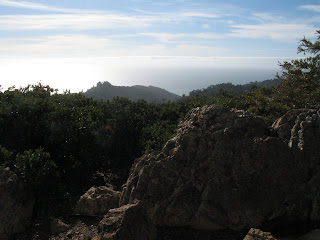 Big Sur has lots of great hiking opportunities and we've been taking advantage of them. Our longest hike to date was the Buzzard's Roost Trail, a rigorous five miles up gaining 700 ft of elevation. At the top is a stunning view of the Pacific Ocean ahead and Mt Manuel behind. There is also an antenna at the top of the mountain; one of the pictures here is of me climbing on it to pose. I promise, Mom, I was careful! :) 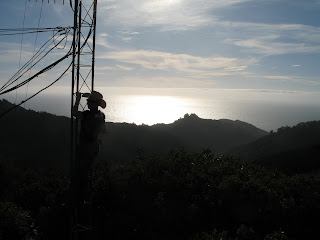 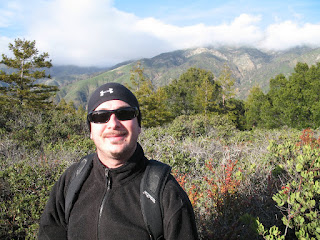 I've tried to blog several times from my cellphone but technology is seriously lacking out here in Big Sur. The cell service is spotty. Most of the park staff think it's amazing that Chris is able to get internet out here. I tell them he's just that good of an IT guru! For goodness sake, the ONLY radio station available out here is NPR! It is difficult to be away from most of our conveniences we are used to. We've gone to using a Skype phone line. Our cellular calls were getting cut off all the time. It makes it more difficult for me to blog also because I used to always blog by emailing from my cellphone.
We've both been working very hard lately. I've been working at the front kiosk a lot and Chris is working on a new project. We're still trying to adjust to having different days of the week off. Chris's weekend is on Sat and Sunday but my days off are Wed and Thursday. Chris's birthday was on the 3rd and we enjoyed spending a quiet day together. We ate at Nepenthe's restaurant on the coast. The food was pretty good and the view of the ocean was very beautiful! 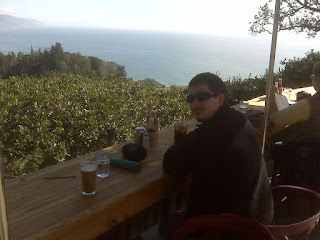 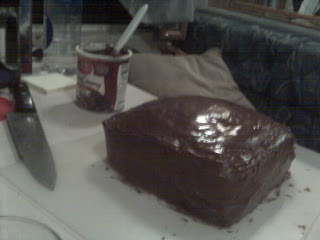