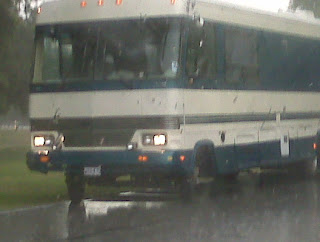 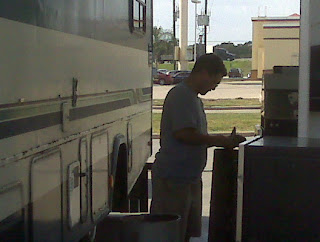 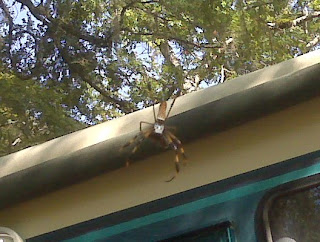 We've made our biggest move to date, over 150 miles to Needville, TX, south of Houston. We had a couple little adventures on the way here, like forgetting the map where we had worked out the best route. We used my blackberry maps and that route took us through rural Houston at rush hour...oops! One day we'll get a trucker GPS which will help us stay on roads designed for big vehicles like our rig. We bought $150 worth of diesel, oh boy. (Our property manager, Luka, makes biodiesel and we drove out to his house and watched him making a batch. Chris is already working on how to make it on the road!) While we were trying to figure out how to get back on the highway (rush hour of course) a picture fell off the wall and the glass smashed everywhere! I know, it was stupid to hang glass in the RV. So while Chris was driving and trying to manuever on these tight roads, Melissa was in the back cleaning up the glass so the cats wouldn't step in it!
The torential rains started coming down right as we arrived at the park. This place is so green and lush it looks like a tropical rain forest!
Our last surprise of the night was just after sunset. We heard a ruckus coming from under the bus. This park is well known for its alligator population...could we actually have a gator under the RV? And WHO is going to stick their nose out and check??? We taped the webcam to the end of the broom and stuck it out the door...too dark to see anything...what could it be?! Finally the curiosity was killing me so I bravely hefted my flashlight and lept off the stairs, ready to dash back inside if it runs at me... Haha! It was just a couple of racoons digging in the trash after they had craftily opened the rubbermaid I had sealed that trash up in!
I'm posting the pics I have now, maybe Chris can post the webcam recording from last night. We never did get a really good picture of the coons but you can hear me saying, "Well, what will scare coons away?" And Chris says, "Nothin'." :)
This morning we awoke to find a new neighbor, a big banana spider right outside the front door! Now we're going to go look for some alligators and then Chris has some work to do.
I'm sure I'll get lots more pictures of the amazing wildlife here!
Posted by Chris at 10:16 AM